Earlier this year I was privileged to speak at the North American IPv6 Task Force (NAv6TF) 2017 conference held at LinkedIn’s offices in Sunnyvale California.The NAv6TF has a long history of promoting IPv6 adoption in North America and further afield. Many well-known IPv6 names are actively involved in NAv6TF. This year, I joined a truly excellent set of  speakers from organisations such as LinkedIn, Cloudflare, Akamai, Cisco, Microsoft, NASA, ARIN, Comcast, Infoblox and T-Mobile.

My presentation described the effects that the increasing deployment of Carrier Grade NAT (CGN) is having on the legacy IPv4 Internet. CGN is causing problems for all parties from application developers, content providers, service providers, law-enforcement through to end-users. These non-trivial problems can all be mitigated or resolved through the deployment of IPv6. As a result, CGN and the degradation of the IPv4 Internet are acting as drivers for the adoption of IPv6.

You can watch a video of the session below or view the slides here.

At the conference, Kevin L. Jones from presented a very interesting talk on the status of IPv6 in NASA and the Federal government. I was delighted that he had taken the time to measure the IPv6 status of each of the organisations represented by speakers at the conference. Erion got five out of five stars! 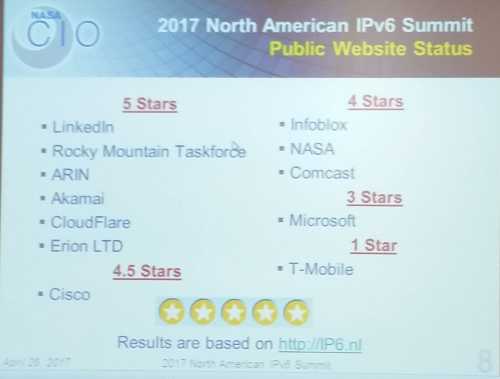 This entry was posted on Friday, June 23rd, 2017 at 3:17 pm and is filed under IPv6, News, Conference. You can follow any responses to this entry through the RSS 2.0 feed. Responses are currently closed, but you can trackback from your own site.