I was privileged to be invited to speak at this year’s IPv6 Security Workshop arranged by the UK IPv6 Council. The event, held at the BT Centre in central London, was oversubscribed well in advanced with around 170 delegates registered. This was the largest subscription for any IPv6 Council event to date and the speediest registration yet! The speaker line-up included many leading IPv6 security experts, those involved in developing IPv6 security standards, the National Cyber Security Centre and a range of industry experts. We were all delighted to see such a high level of interest in IPv6.

In my introductory presentation, I gave a quick, but comprehensive, overview of the fundamentals of IPv6 Security. You can view the slide deck here. For those who were not able to attend, here are a few highlights.

The first crucial point to appreciate is that IPv6 is everywhere. It is the default on all major operating systems and is widely deployed across the Internet. Further, its growth is exponential and at the current rate all Internet users will be using IPv6 by 2020. If you have IPv6 today you will find that over 75% of your traffic will be carried by IPv6 rather than IPv4.

There are two, possibly three, widely held misconceptions regarding IPv6 and IPv6 security. The first two are:

Both of these are wrong. They both assume that a comparison between IPv4 and IPv6 is meaningful, it isn’t. The reason is simple, in our networks there are no IPv4 stacks, all stacks are IPv6 stacks. Therefore, whether you are using IPv6 or not the vulnerability surface of your IPv4 network is practically identical to that of an IPv6 network. There is a combined vulnerability surface consisting of IPv4 and IPv6 vulnerabilities. Comparing the two is therefore meaningless.

There is another major misconception that is relevant to IPv6 security and that is,

Even IPv6 and IPv4 addresses are very different and not just in their length. For example:

These differences and that includes all the differences not just those relating to addresses, have a direct impact on the IPv6 vulnerability surface and the mitigation techniques required for IPv6.

Whilst it is not possible to list all the IPv6 vulnerabilities it useful to get an idea of where the problems lie. The slide below shows a rough approximation of the IPv6 vulnerability surface. It is not complete and it cannot show how probable or how significant each of the risks is. What it does show is how many new and different areas there are that need to be considered when implementing IPv6 security. 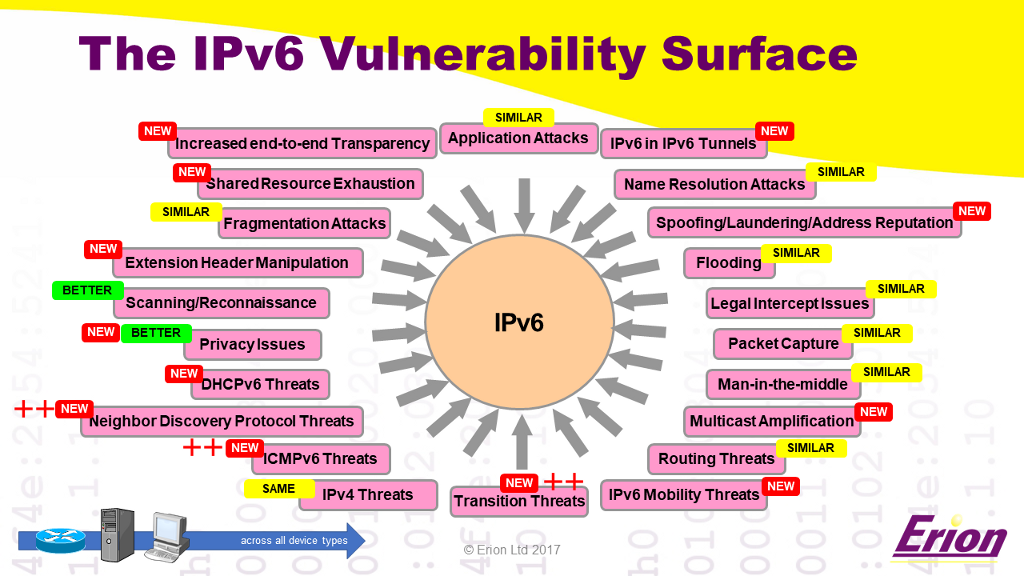 In the presentation, I went through a number of key areas to illustrate three things; first that IPv6 is significantly different from IPv4, second that some of the areas of vulnerability shown in the above diagram contain many vulnerabilities themselves and finally that not everything is worse. Some things are better than IPv4. Of particular note is the area of scanning and reconnaissance. In IPv4, scanning a whole network is simple and fast. In IPv6, it is impractical to directly scan every address in an IPv6 subnet. This is because testing every address in an IPv6 subnet would take hundreds of thousands of years even on Gigabit networks. This is not to say that attackers cannot discover the addresses of IPv6 nodes, they can, it is just much more difficult for them to do so. However, do not forget that all of the vulnerabilities of IPv4 exist in the IPv6 dual stack, therefore even though scanning IPv6 might be difficult if nodes also have IPv4 addresses is it is still trivial for an attacker to find those nodes from their IPv4 addresses.

When designing and implementing your IPv6 security policy you should pay particular attention to these areas that are listed as new in the diagram. Those areas that are similar to IPv4 are often mitigated in IPv6 using the same techniques that are common in IPv4. Therefore, you should begin by ensuring that the security techniques that you use for IPv4 are also implemented for IPv6. For example, you should use ingres and egress filtering in both IPv4 and IPv6 and you should use unicast reverse path forwarding in both.

In terms of the many differences in IPv6, you need to pay particular attention to the NEW areas in the diagram. Of these, the increased end-to-end transparency, extension header attacks, neighbor discovery attacks and transition mechanism attacks are of particular importance, but this is not to say that you can ignore the other areas. In the presentation I went through each of these and gave specific examples of the types of vulnerabilities. Here are five of the areas that I covered:

I then gave a whirlwind tour of IPv6 security features and their pros and cons. Briefly these were:

The key high-level points to take away from my presentation were:

Erion recently released a NEW IPv6 Forensics course. This advanced course covers all aspects of IPv6 forensics and is ideal for all those involved in forensic activities.

Other Presentations from the IPv6 Security Work Shop

This entry was posted on Saturday, July 22nd, 2017 at 2:53 pm and is filed under IPv6, Security, News, Conference. You can follow any responses to this entry through the RSS 2.0 feed. Responses are currently closed, but you can trackback from your own site.